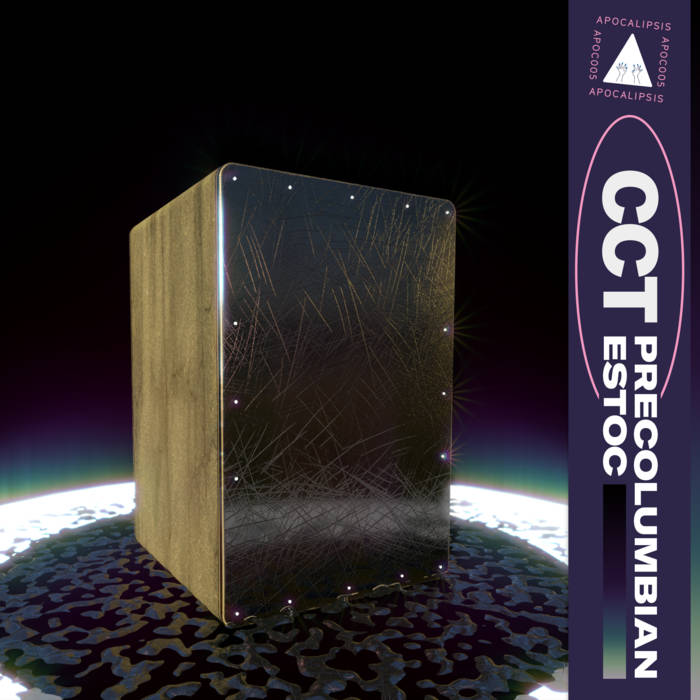 he rr ast i

'CCT' from Philadelphia’s Precolumbian and Estoc meets at the genre-transcendent intersection of Afro-Peruvian percussion and hardstyle. The artists are also founders of Search Engine, a new club night that showcases trans women DJs and producers, while creating a safe space to explore nontraditional club music.

To coincide with the release, APOCALIPSIS is fundraising for Morris Home, the only drug and alcohol treatment program in the United States exclusively serving trans and gender non-confirming individuals. To donate, paypal.me/apocalipsistoday.

'CCT' intersects at the cross-section of the producers’ styles, finding an alliance between cajón and hypnotic, driving club music. 'CCT' offers intricate-yet-club functional drum programming, with breaks that are as ready for the dance floor as it is for remixing.

'CCT' references music that Precolumbian grew up listening to and that has been with her throughout her life. Both tracks hone in on festejo and landó music, paramount rhythms in Afro-Peruvian music that incorporates heavy use of the cajón percussion instrument, which forms the basis of much of Perú’s national music heritage.

Precolumbian is a Philadelphia-based DJ, musician and cultural creator. She is co-founder of queer experimental club night Seltzer. Her work was honored with the 2013 Leeway Transformation Award and has been featured in The Fader, NPR, MTV, Remezcla, and Fact Magazine. Recent notable performances include: iBomba Boiler Room, Red Bull Radio, Toronto Pride, Macrock, Rolling Stone Latino at The Latin Grammys, and The Baltimore Museum of Art.

Estoc is a DJ and producer currently based in Philadelphia. Her work is centered around the intersection of antifascism and hardcore music. She has been featured in Fact Mag, Tiny Mixtapes, i-D, and Resident Advisor, among others. She has also made mixes for Rage Radio, The Astral Plane, Stock71, Seltzer, and many more.

Bandcamp Daily  your guide to the world of Bandcamp